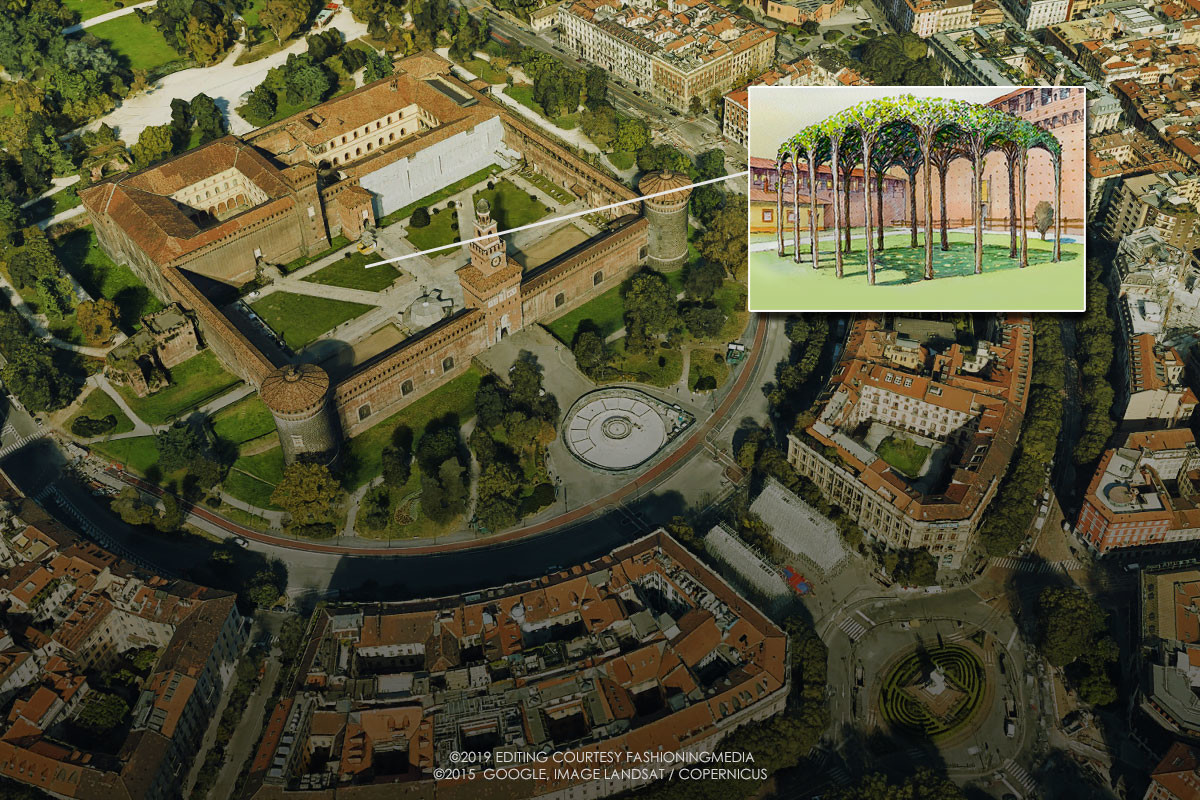 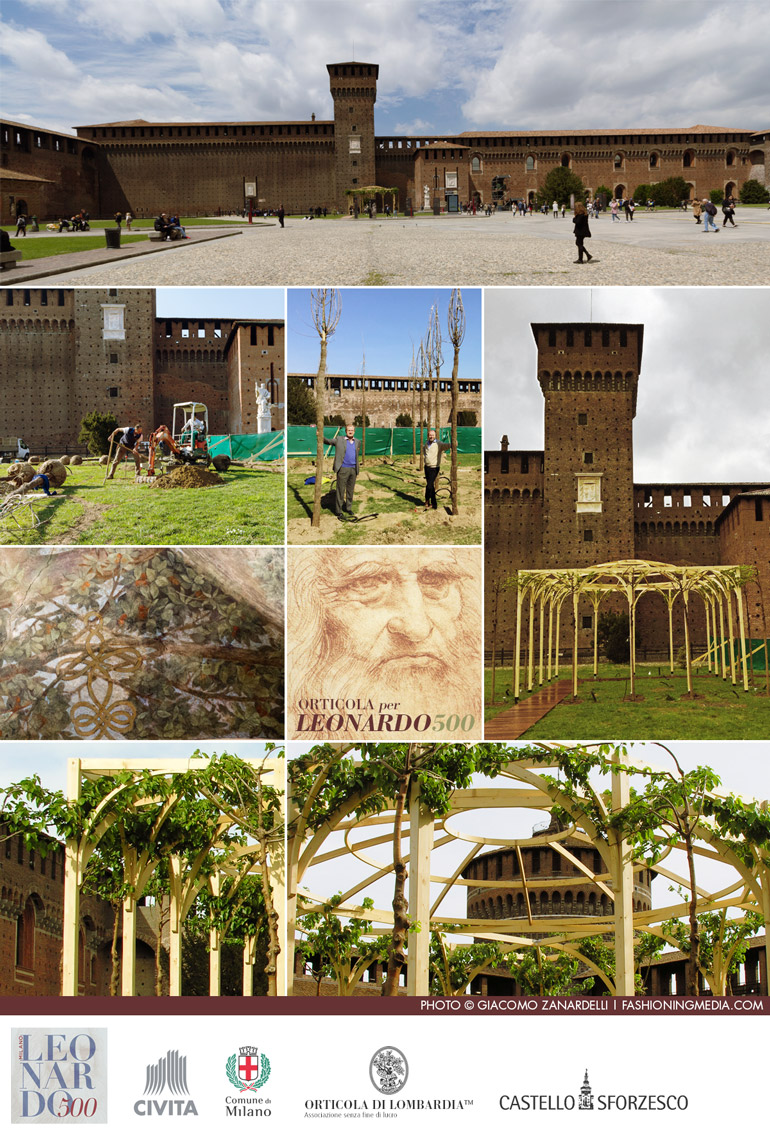 Planting of mulberry trees and the supporting structure made of wood
Orticola’s President Gianluca Brivio Sforza and landscape architect Filippo Pizzoni who designed the project
Orticola di Lombardia per Leonardo 500 at the Castello Sforzesco “Work in progress”
March, April, May 2019 © ALL RIGHTS RESERVED

The Mulberry Pergola is erected, just a few metres from the original painting, to celebrate Leonardo da Vinci, to commemorate 500 years since his death and the reopening on this occasion of the Sala delle Asse (Room of the Wooden Boards) to the public after restoration. It is a 1:50 scale representation of the gigantic decoration designed by the Master on the walls and ceiling of the Sala in 1498.

Leonardo painted a particular pergola where the structure is provided by the plants themselves, a living organism. Trees, specifically cultivated and shaped, create the pergola, true plant architecture.
The project, promoted by Milan Municipality (Department of Culture and Department of Tourism, Sport and Life Quality) and the Sforza Castle Authority, approved by the Archaeology, Fine Arts and Landscape Office for the Metropolitan City of Milan, is the work of the landscape architect Filippo Pizzoni, Vice President of the Lombard Horticultural Society, and will be created with the collaboration of Milan Municipality (Culture – Tourism – Landscape), Civita and Lucio Rossi Nurseries, with the technical support of Artemide for lighting. The worksite, active since the beginning of March, will be closed in time for the official opening of the Sala delle Asse on May 15th within the “Milan and Leonardo 500” programme.

Preparation involves a wooden structure built as an exact scale model of the Sala. Sixteen mulberry trees (Morus alba) are planted around this, similar to the ones painted by Leonardo, pruned appropriately to adapt to the structure which they will envelope. Over time the new branches will be fixed to the framework in order to cover it completely after two or three seasons so that visitors can witness the formation of a traditional pergola using ancient techniques: leafy in the summer as protection from the sun and bare in winter, revealing its important structure. The idea is to make the Sala delle Asse known to a wider public, taking it “outside” to invite Castle visitors to walk to it along the pathway of the Museum of Ancient Art at the base of the Embrasure Tower. A notice board will explain the creation and growth of the pergola, also showing the agricultural techniques used in pergolas at that time.

The creation of a “real” mulberry pergola gives visitors an opportunity to learn about Leonardo’s work with a living construction and also to experience a pergola as it could have been conceived and created at the time Leonardo lived in Milan. Pergolas have been amply described in several treatises and frequently illustrated in engravings, showing that they were undoubtedly present in gardens at the time. It is therefore likely that Leonardo had seen a similar pergola near the Sforza Castle.

The mulberry trees forming the Pergola are supplied by the Lucio Rossi Nurseries, set up in the early 1940s, gradually specialising in the production of deciduous trees. The present owner, who took over in 1988, has gradually increased the production and the land cultivated from the original 10 hectares to more than 100 at present.

Preview from Il Corriere della Sera about the project (July 2018):