Orticola is an historic association with birth on 1854.

A traditional Vocation of the Lombard Horticultural Society

On December 16th 1865, the act for the foundation of the “Società Orticola di Lombardia”, modelled on the “Société d’Horticulture de France”, was signed in Milan. The intention was to pursue the culture of the beautiful and the protection of the natural territory.

Green interventions for the city

Since 1996 the Lombard Horticultural Society has been devolving profits from the flower show to green areas in the city. These initiatives are united under Green interventions for the city, regulated by the convention stipulated in 2014 with Milan Municipality.

Take a look at the list of philanthropic works and achievements developed over the years by Orticola di Lombardia for the benefit of the community.

A new four-year seasonal meetings of Study Days will be developed following the first Study Days project, a four-year cultural program finished at the end of March 2015.

A new series of seasonal meetings will begin in April 2017, in which illustrious members from the world of plants and gardens will discuss contemporary themes to answer the needs of an ever-growing interest.

A series of seasonal meetings, Orticola Dialogues started in autumn 2016.

“Let’s look after our historic garden” 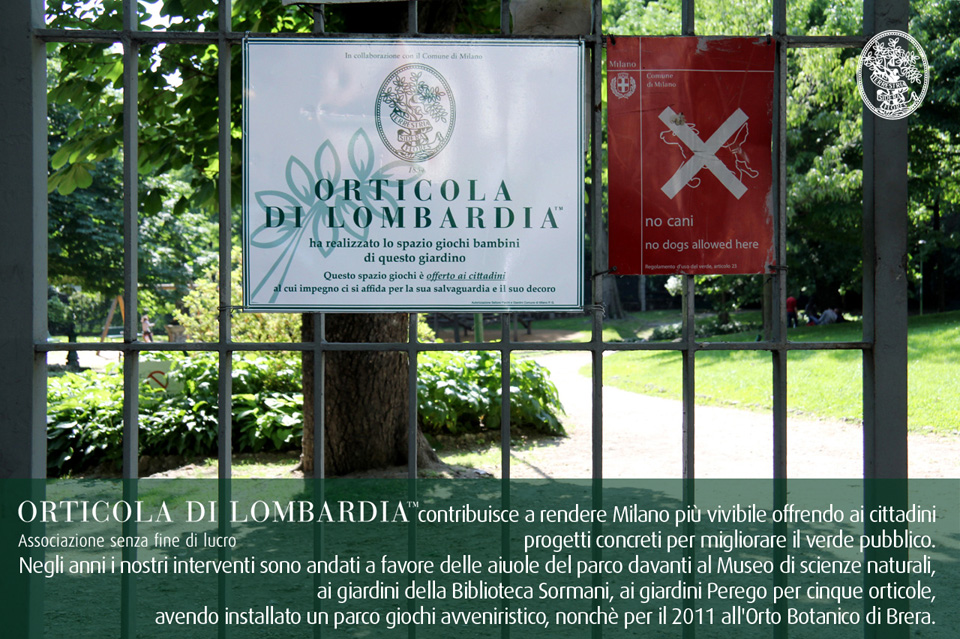 The gate of Perego Garden

Orticola has always been active in promoting the culture of gardening, and intends to continue the work of raising awareness and lending a hand, not only in open spaces in general, but particularly those in the city. At the same time it tries to arouse a civic sense in the Milanese, by making them aware of the need to live in harmony with nature. Orticola’s commitment to the city’s open spaces remains constant.

Over the years our interventions on behalf of the community have been:

The  futuristic playground at Perego Gardens

The Lombard Horticultural Society and Milan Municipality, working side by side for years on the development of green areas in the city, have signed a three-year agreement providing for investment of the proceeds from the historic show in the Montanelli public gardens in projects for public open spaces.

In May 2014 Gianluca Brivio Sforza, President of the Lombard Horticultural Society, and Chiara Bisconti, Environment Councillor for Milan Municipality, signed a three-year agreement providing for the investment of the proceeds from the historic show in the Montanelli Public Gardens in projects to provide new public open spaces and to improve existing ones.

“This is an important agreement”, declared Chiara Bisconti, “which could become the model for future collaboration with other private parties. Orticola is a historic show, we have recognised its cultural value and with this agreement we give precise guarantees to the organisers of the shows for the next three years, especially 2015 which will be particularly important due to its concurrence with Expo. I would like to thank President Brivio Sforza and the Lombard Horticultural Society for the awareness demonstrated as well as their passion for this city which they have lavishly dispensed for twenty years. In the agreement we predict increased collaboration in all the many cultural events linked to the environment together with the municipal museums”.

The use of the Montanelli Gardens is guaranteed to Orticola for three years under the same conditions as at present. Any profits from the show will be invested in the enhancement and maintenance of Milanese public open spaces, by proposing specific projects of sponsorship to the Municipality following the procedure already in use for all the adoption programmes and care of the city’s green areas.
Orticola will also guarantee a series of discounts for admission for the next three years: tickets bought on-line will not cost more than 9 euros, while admission will be free for school children and under 16s. The agreement is of great importance to both parties, in that it could become the model for future collaboration between public and private entities of recognised cultural worth.