A new four-year cycle of “Study Days” started in 2017.
The next meetings program conducted by Filippo Pizzoni and Margherita Lombardi for Orticola di Lombardia will take place on february 14th & 15th, 2020.

We were lucky enough to have Carlos Magdalena as one of our super guest presenting “Rescue mission, endangered plant species” 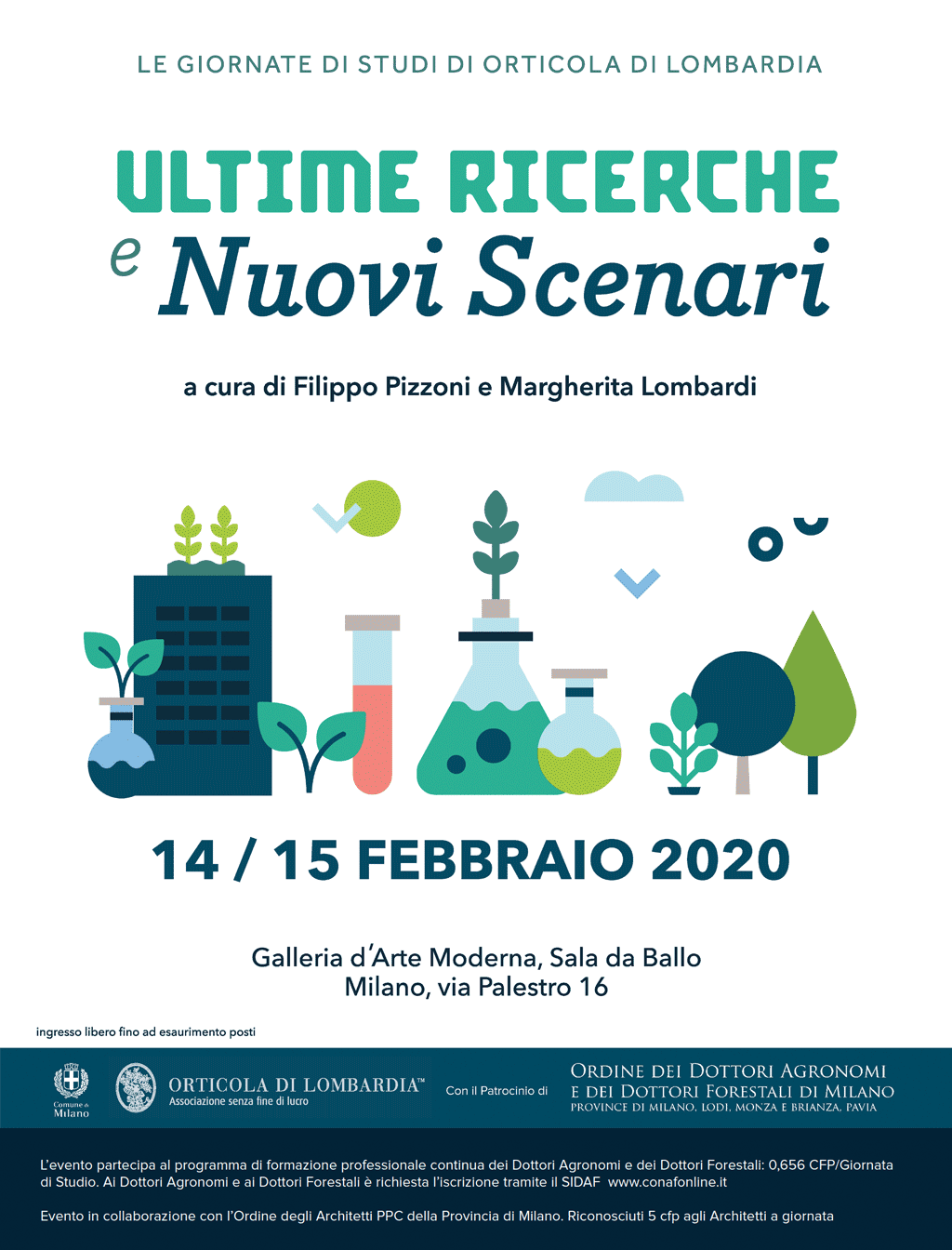 “Plant Culture in Italy, from the Risorgimento to the Third Millennium”

by Filippo Pizzoni and Margherita Lombardi for Orticola di Lombardia

“GAM”, the Modern Art Gallery in Milan hosts “The Study Days” of the Lombard Horticultural Society, a philanthropic event for the benefit of the Milanese community to share knowledge and significant data from the history of plant culture in Lombardy and Italy. Free admission for everyone. 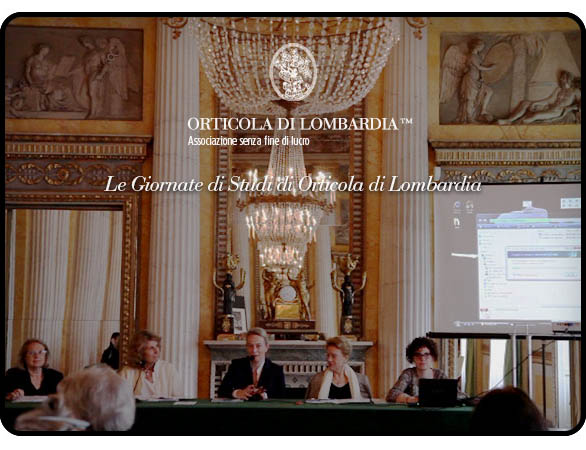 The culture of plants and gardening has deep roots in our country, due to historic, artistic and natural contributing factors, which have witnessed the development of a great agricultural tradition in Italy, and the creation of an incredible historic artistic garden heritage, the destination of cultured tourism, with important botanical collections and excellent horticultural production highly esteemed worldwide.

The multi-disciplinary approach in fact aims to stimulate dialogue between different experiences and fields of study, which help to understand the evolution of such an important part of Italian culture, to analyse as many aspects as possible in order to formulate a general picture, with the aid of historic documents and works of art present in the rich heritage of civic collections.

The Study Days are aimed at students, professionals in the field, enthusiasts and scholars of the various disciplines to stimulate an exchange between different fields of knowledge, which help in understanding better the evolution of plant culture in Italy.

Development of the Programme over the years 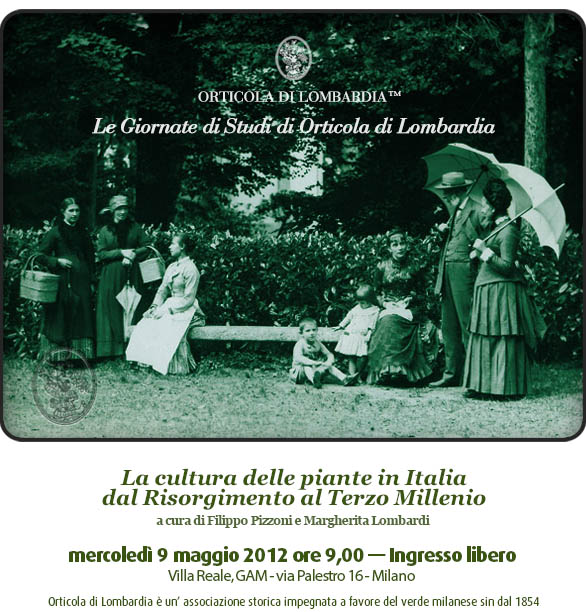 Beginning with pre-unification Lombardy, the first edition dealt with the passage from Enlightenment encyclopaedic culture to the scientific and pragmatic aspect. The introduction of an infinity of new plants and the fashion stemming from beyond the Alps showed a new way of making gardens while in Milan the first interventions in the city landscape were conceived in an environment distinguished by such impassioned botanists as Luigi Sacco, Luigi Castiglioni, Ercole Silva and Alessandro Manzoni.

2013 — “Plant culture from Unification to the First World War”

Plant culture developed during this time of great revival between the Unification of Italy and the first world war: many new public parks and gardens were conceived with backup from the important journeys of plant hunters, while professional horticultural production was established and important associations and publications flourished. A constantly growing interest is reflected in all the artistic forms, and the great botanical passion of Giuseppe Verdi, an expert gardener on his property at Sant’Agata, was celebrated during the bicentenary of his birth. 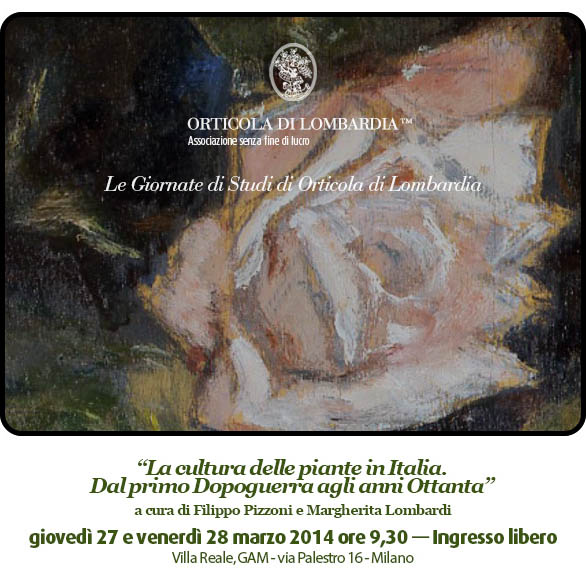 The leading figure of the time immediately after the first world war was Gabriele D’Annunzio who described plants with the accuracy of an expert in his writings. This period witnessed the revival of the so-called Italian style while, after the second world war, Italy produced a landscape designer of international calibre: Pietro Porcinai. Private gardens began to open to the public in the 1950s and flowers and plants began to inspire fashion. This crescendo culminated in the 1980s, when discussions on plants and gardens resurfaced in the work of Ippolito Pizzetti and specialised publications. 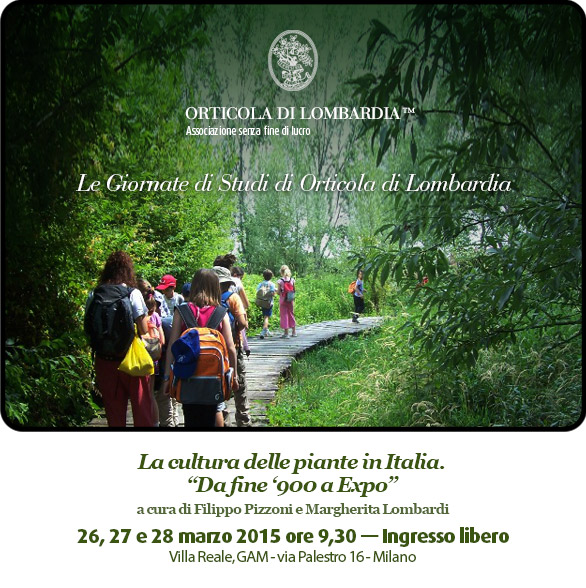 The latest edition of this four year programme deals with the many themes that consider plant culture to be a very fashionable topic since the end of the 1980s.

Which are the new professions linked to plants? What are the risks of globalisation? Which are the topics of urban horticulture and communications in the field? Which are the new leanings in the management of historic gardens or the design of urban parks? Three days of meetings and talks with the greatest experts in the sector to answer all these questions, and sum up the state of the art of green culture in Italy and look into the future that we can only surmise.

Topics and speakers over the years | Year 2012

— The camellia from East to West: the role of Lombard aristocrats in its diffusion in Italy
Andrea Corneo ~ President Italian Camellia Society

— Going into gardens.
Pictures and societies from the Ancien Régime to the Risorgimento
Stefano Zuffi ~ Art historian

— Alessandro Manzoni on agronomy, botany and nomenclature
Gianmarco Gaspari ~ Director of the National Centre of Manzoni Studies in Milan

The painted flowers of Francesco Hayez: which species and which stories
Luca Fadini ~ Botanic historian

Topics and speakers over the years | Year 2013

— The history of the Ingegnoli nurseries, botanical trips and illustrated catalogues
Francesco Ingegnoli

— The native of Roncole.
Giuseppe Verdi «peasant» in the bicentenary of his birth, 1813 – 1901
Marta Isnenghi

— The notebooks of a grafter from Valtellina: Andrea Credaro (1831-1888)
Augusto Pirola and Nella Credaro

Giveaway nature.
Plants and flowers in commercial picture cards between 1800 and 1900
Daniele Fazio

— Photography: in the beginning were plants
Silvia Paoli

— The expressiveness of Art Nouveau flowers and lines
Lucia Impelluso

Glasshouses and winter gardens: the culture and cultivation of plants in the second half of the 1800s
Sabina Villa

— The Language of flowers
Filippo Pizzoni

Topics and speakers over the years | Year 2014

— The garden of the poet soldier. D’Annunzio and the Vittoriale degli Italiani
Federico Simonelli

— The English in Italy
Filippo Pizzoni

— Plants and flowers in Italian fashion: from the 1920s to the 1980s
Virginia Hill

— Orticola in the city.
Milan in bloom, the Xth Triennial and the 1959 exhibition on Lombard Gardens
Marta Isnenghi

— Plants and flowers on the Italian table
Gualtiero Marchesi

Topics and speakers over the years | Year 2015

30 years of Plant culture in Italy

— Biodiversity, agriculture and EXPO
Marco Fabbri, President of the Association of Agronomists and Foresters in Milan.

— Green publications at the outset of the third millenium
Emanuela Rosa-Clot, Editor of Gardenia

The green culture in Italy, opportunities and prospects

— From paradise to hell: the “Golden Valley” of Palermo pillaged by the construction boom
Giuseppe Barbera, Palermo University.

— Ninfa and Pantanello Park, the restoration of a landscape
Lauro Marchetti, Director of the Ninfa Garden Natural Monument.

— Pleasure villas and historic gardens in Lombardy: a heritage to manage and nurture
Laura Sabrina Pelissetti, President of Regis, the Historic Gardens Network.

— The new structure of agricultural farms:
between multi-functionality and sustainable agriculture
Giovanni Sala, Councillor of the Associazione 100 Cascine (100 Farms Association).

The green, a cultural topic to adjust, implement, communicate

— The culture of landscape and the development of a profession
Luigi Latini, IUAV University Venice.